Created by the Republican Liberty Caucus, the 2021 Liberty Index is a liberty-focused legislative scorecard for the U.S. House and U.S. Senate. The Liberty Index scores Republican members of Congress on 20 pivotal bills/votes from 2021 that either advance liberty or diminish liberty. Green bills are pro-liberty bills supported by the RLC. Red bills are anti-liberty bills opposed by the RLC. For information on the bills we selected, see the bill explanations on page three of the document.

A high score on this scorecard does not equate to an automatic endorsement from the RLC. This scorecard simply evaluates the voting record of each Republican member of Congress during the 2021 calendar year. 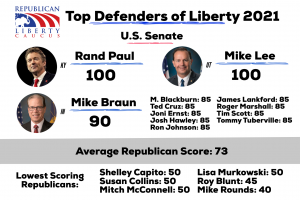