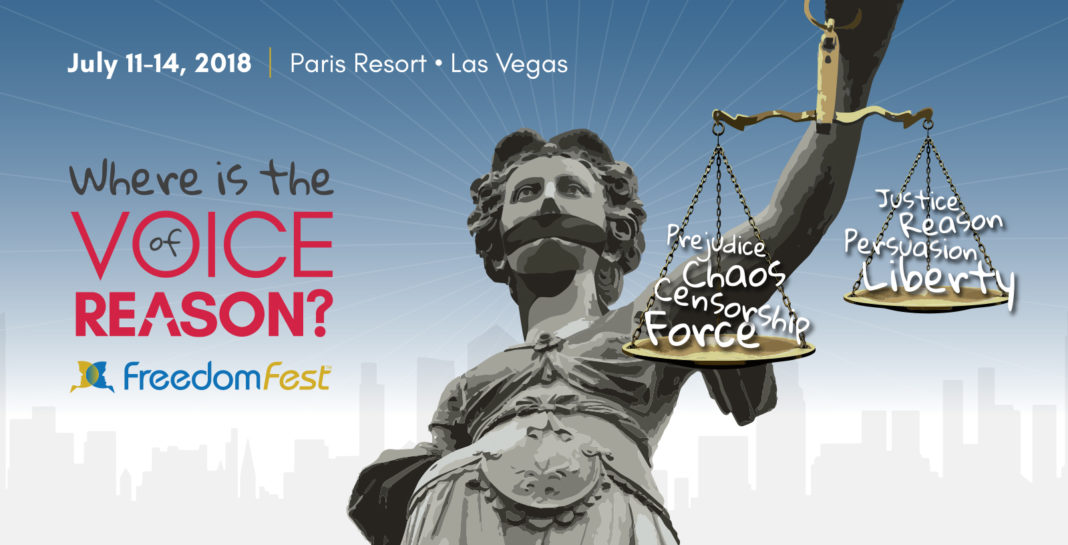 Having never attended any previous Freedomfest before, I was excited by the prospect of attending this year’s convention. I would finally see the broader liberty movement at work and listen to some of the greatest minds on the subject. In many cases, I was not disappointed. Over the course of the three day event, I heard from Republicans, Libertarians, and Independents talk about the different aspects of our philosophy and its growing impact on the world. The event was billed as a place where all defenders of liberty could gather and share their story, network with others, and discuss where the movement itself was heading. It was an event not to be missed.

I went into the convention with a particular concern on my mind. I had previously read an article written by Bruce Majors, via thefederalist.com, titled “Libertarians Struggle to Distinguish Themselves From Trump” which aroused my curiosity, not to mention the angst of many in the Libertarian Party. The article discussed how Trump, as a Republican, has accomplished many if not all of the major goals of the Libertarian Party by employing a populist strategy to his governing style. As a registered Republican and member of the RLC, I wanted to see how the broader liberty movement was dealing with the growing issue of populism. I wanted an answer to a very specific question, “Where do we go from here?”

Today, many principled Liberty Republicans are finding it difficult to gain attention, break past their respective primaries, get elected, and still maintain their principles. It was easier for Liberty Republicans to campaign and win during the Tea Party days, but that time seems long gone. Many have gotten close, but it’s taken name recognition, a talent pool of dedicated volunteers, money, and the ability to stand for their beliefs while correctly traversing the politics of the day. Many will say that this is nothing new and that politics has always had to catch up to popular culture. While that may be true, I would still agree with Mr. Majors’ over-arching point; liberty candidates are having a hard time distinguishing themselves on the campaign trail after President Trump’s victory. There is hope though.

During the convention, I was able to attend a session titled “Republicans Gone Wild: Reaching the Liberty Curious Generation” whose speakers included Congressman Thomas Massie, Congressman Tom Garrett, Senator Mike Lee, and was moderated by Matt Kibbe. The session itself lasted less than hour and produced solid talking points that, in my opinion, all Liberty Republican candidates as well as Republican Liberty Caucus members should incorporate.

1) Be willing to be disruptive.
2) Coalitions can be built on an issue by issue basis.
3) Focus on the value of freedom.
4) Find the issue that you’re passionate about. You will find support.
5) Say no and mean it.
6) It’s all about spending.
7) Be proud of being a defender of freedom. You are the difference between life and death.

These “rules” for radical liberty minded individuals came from three well known Liberty Republicans who are serving today. They represent a perfect response to the growing populism that is directing our political climate. They’re not adversarial in nature but represent a pragmatic approach to principle. Liberty Republicans are going to continue to have a love/hate relationship with populism, at least for the time being, but with these rules, there is now a direction to follow. After much thought, I have to say that it’s not all bad. This is a tremendous opportunity to shift the concept of what it means to be a Republican. Many are already working towards returning the GOP to the values of liberty that men like Frank Meyer, William Buckley, Barry Goldwater, Ronald Reagan, and Ron Paul have advocated.

A recent Washington Post Article titled “The Next Generation of Republicans” by Eliza Gray details 52 individuals who are working in various organizations and capacities in and around the Liberty Republican movement. The Republican Liberty Caucus is one such organization. We’re at a critical point in time. President Trump has ushered in a disruption in traditional politics and it’s organizations like ours that will make the difference in shaping the beliefs, platform, agenda, party, and government in the years to come. The broader liberty movement is growing and individuals are looking for their place in it. The RLC is the political home for those looking to bring liberty into the mainstream. Our strategy has successfully elected liberty candidates to office and will continue to do so. The future looks bright. Join the RLC.