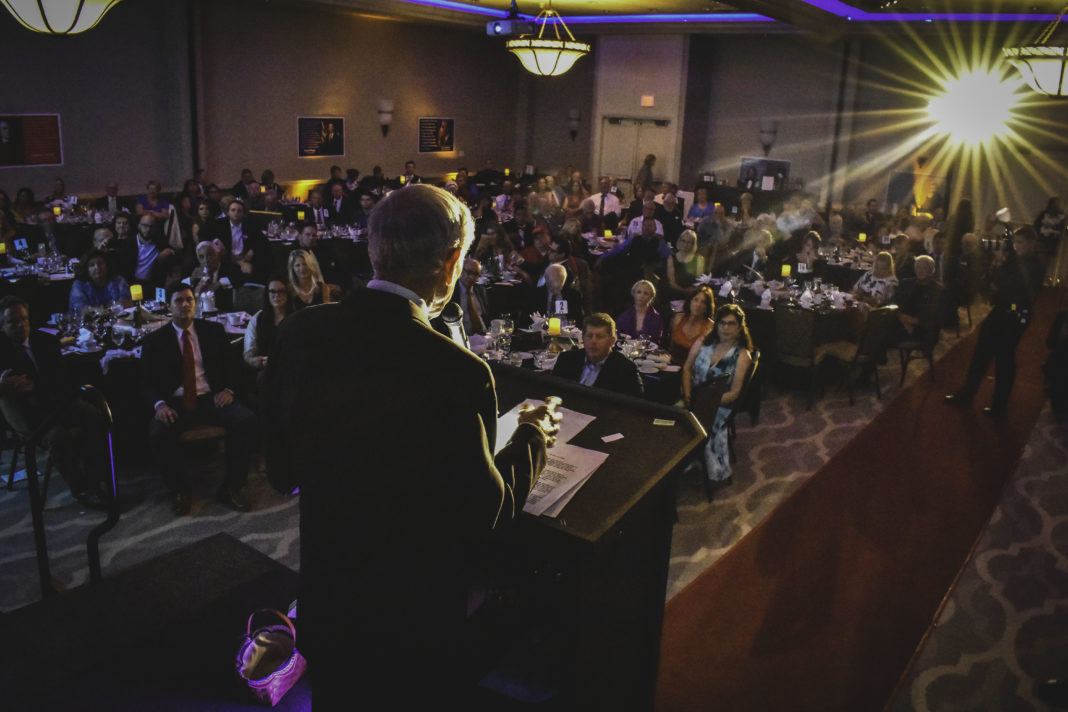 The RLC of Central East Florida has held an event to celebrate Constitution Day for the past 10 years. Each event growing larger in stature and outdoing the previous year’s gala. This year’s Constitution Day Dinner took place at the Hilton Melbourne Rialto Place in Melbourne, FL on September 23rd. Guests were originally scheduled to hear from Judge Andrew Napolitano, but due to the Supreme Court proceeding coverage on Fox News, he was called back to work. In his place, the RLC-FL brought in the “Godfather of the Movement” himself, Dr. Ron Paul.

This wasn’t my first RLC of Central East Florida dinner. I had attended the previous year’s event when Tom Woods was the key note speaker and I was very excited to attend this year’s get together. I had purchased my ticket several weeks in advance including the VIP access. I was looking forward to meeting the Judge and hopefully hearing any updates about his upcoming return to cable news. When I heard that he was not able to attend and was being replaced by Dr. Paul, I was pleasantly surprised. In all my years of following his political career, I had never actually met the man who inspired much of my own political thought.

On the day of the dinner, I arrived an hour prior to the scheduled start time to find that the party had already begun. The reception area was already crowded as I made my way to the check in table then on to the VIP suite. Upon entering, I’m greeted by Ron Paul himself and I was instantly star struck. I’ve met Justin Amash, Rand Paul, Thomas Massie, and Mike Lee and never experienced one second of fan stunned silence, but this was Ron Paul. I exchanged pleasantries with the man and even received his autograph on my Austin Petersen “Make Taxation Theft Again” ball cap. A memento that I will proudly keep. The VIP area was a gift to the RLC of Central East Florida from State Senator Debbie Mayfield. Her continuing contributions to the RLC’s efforts garnered her the prestigious Jefferson Cup award this year.

I spent the majority of the time at the event speaking with friends and fellow RLC-ers and getting updated on the happenings in Brevard County and Florida politics in general. The RLC-FL has become a powerful vehicle that represents the libertarian wing of the Republican Party. Candidates have taken notice of how influential the RLC has become and have added this group and their events to their lists of must attend. I can only credit the leadership of the RLC-FL and the tireless work of the volunteers that makes such an organization so successful.

The former gubernatorial candidate and Chairman of the RLC- FL Bob White took the stage to introduce the night’s key note speaker. Chairman White gave an eloquent introduction followed by reading a letter from Congressman Bill Posey awarding Dr. Paul the key to the city for all his efforts serving his nation. Dr. Paul spoke for nearly an hour on various subjects near and dear to the hearts of RLC members. He received several long applauses on issues concerning taxes, tariffs, ending the fed, education, war, and electing representatives who adhere to the Constitution. He finished his speech by acknowledging that it’s groups like the RLC that keep these issues in the public consciousness and that despite the gloominess of some of the issues he was personally optimistic about the future of the country.

The event was an absolute success and I cannot wait to attend next year’s dinner. I’ve personally told my fellow RLC-ers that I will keep my schedule clear in the future just to attend this event. Outside of the national RLC convention, I believe this is the most important function for the RLC to promote. It’s a shining example of the hard work, dedication, and principle that this organization endorses. I encourage all RLC members, regardless of where they reside, to make the trip out and support this event in the future.