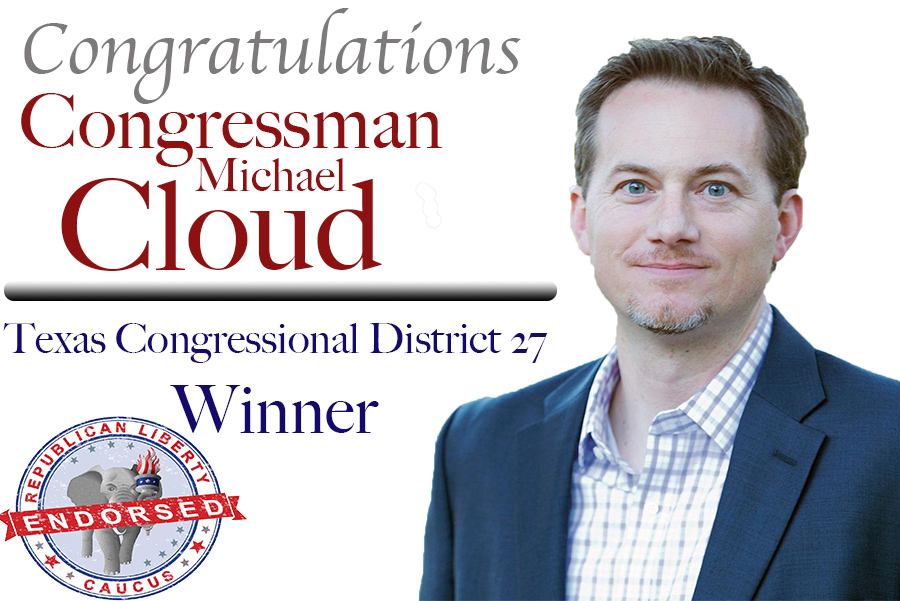 The Republican Liberty Caucus of Texas would like to congratulate Michael Cloud for being the first non-incumbent RLC endorsee for federal office of the 2018 election season to win a contested primary. Cloud defeated Bech Broun with an impressive 61% of the vote in the runoff for the 27th Congressional District in Texas.

Due to gerrymandering, his district is heavily Republican so he is almost certain to beat his Democrat opponent in November. While gerrymandering generally has a bad effect on political diversity, it proves the value of the RLC in promoting a pro-liberty alternative within the Republican Party.

“We were pleased to have such a strong endorsee in Texas,” said Dave Nalle, National Endorsements Director for the RLC. “Cloud stood out from the pack in his qualifications, thoughtful positions on important issues and willingness to buck orthodoxy and stand on principle. This is a great start for the 2018 primary season.”

Carmen Calderon, Chairman of the Coastal Bend chapter, congratulated Cloud and said: “This race showed us that hard work, a strong ground game and building relationships with the voters can overcome big money candidates. The results of this election reflect the vigorous work put in by Michael, his staff, and his volunteers; it was nothing short of amazing.”

RLC members volunteered many hours putting up signs, block walking, making calls, and organizing events to help Cloud make up ground in Nueces County. They help Cloud rise from 18% in the March primary to a strong victory in the runoff.

“Cloud ran a grassroots campaign from the beginning with considerably less money than his opponent and still managed to come out on top,” Said Brandey Batey, Vice Chair of the Nueces County Republican Party. “I believe that it is all due in large part to his connection with the average voter, his strong work ethic and his heartfelt desire to serve his country.”

Best of luck to Cloud and all of our other candidates in the primaries, and in November. We know that they will stick by their principles in office and bring much needed support to our elected endorsees like Rand Paul, Mike Lee, Justin Amash and Thomas Massie.