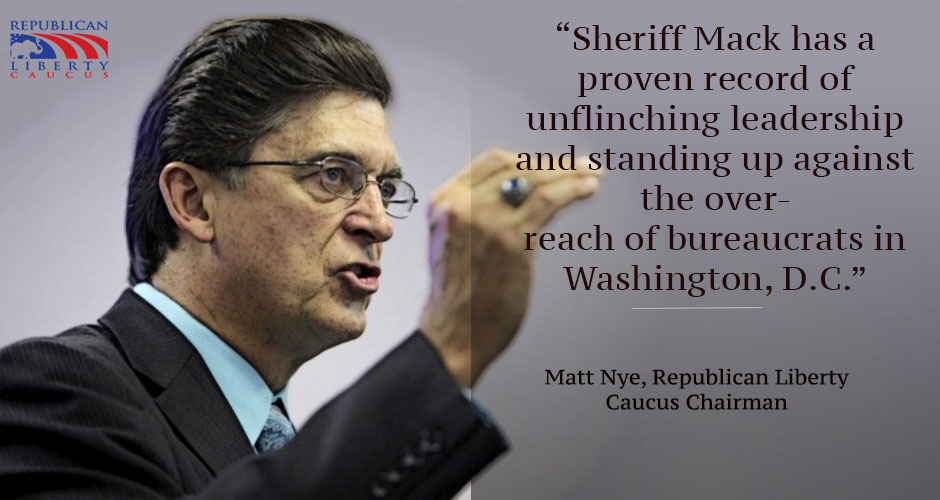 PHOENIX, AZ – The Republican Liberty Caucus announced Monday its endorsement of Sheriff Richard Mack for the US House of Representatives District 8 special election in Arizona to replace Rep. Trent Franks.

“Sheriff Mack has been a stalwart defender of the Constitution for decades, and we are proud to stand behind him in his bid for the CD8 house seat,” said RLC National Chairman Matt Nye. “Sheriff Mack has a proven record of unflinching leadership and standing up against the over-reach of bureaucrats in Washington, D.C.”

A former Arizona Sheriff, Mack, is best known for challenging the Brady Bill, a gun control scheme requiring local law enforcement to perform background checks on prospective gun purchasers. He maintained that the Federal Government had no authority to command local officials and became the first sheriff in American history to sue the Federal Government and win at the US Supreme Court. The case was based on the Tenth Amendment, states’ rights and local sovereignty.

“I had the pleasure of meeting Sheriff Mack several years ago when he came to speak at a local event here in Brevard County, Florida, and I was thoroughly impressed,” Nye said. “From his experience as a sheriff, to his passionate defense of the founding principles of our Constitution, Sheriff Mack has proven time and again he has the integrity, the knowledge, and the force of will to effect much needed change in Washington, D.C.”