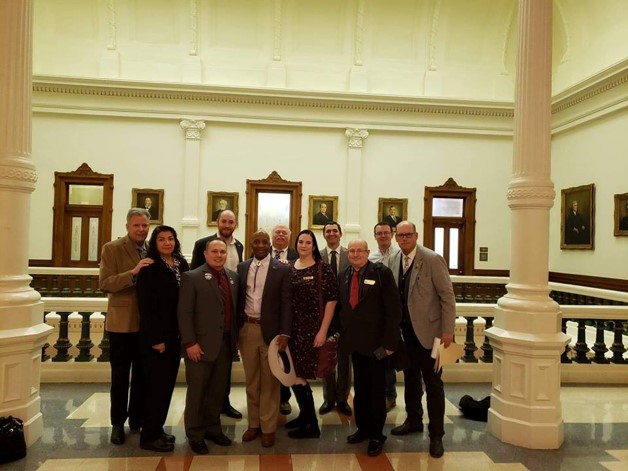 The RLCTX was out in full force at the Texas Capitol for its Legislative Day, Febuarauy 21, 2019. The Texas Legislature only meets every two years and is strictly adherent to a calendar and time limit, regardless what business is left unfinished. The first of three legislative events planned, included the RLCTX delegation meeting with RLCTX endorsed Representatives as well as Representatives who have bills filed and referred to committees on Civil Asset forfeiture Refom, Cannabis Reform and Property Tax Relief.

In Texas, large numbers of bills are filed at the beginning of session and then referred to committees where the bill can either be heard for public testimony and consideration of a vote to be moved forward, or never heard, in effect, killing the bill. RLCTX Chairman, Jeff LeBlanc recently testified on HB 63 which is moving small amounts of marijuana possession in Texas to a civil penalty over a criminal conviction as it currently is in Texas.

The committee then can choose to vote on the bill which moves it forward to a calendar committee which sets the bill for being heard and voted on, on the floor by all Representatives, in effect the second committee has a chance to not set the bill or schedule it so late on the calendar the clock will run out before it reaches the floor, in effect killing it. Finally the bill can pass the House, but never be taken up in the Senate, killing it. The Senate works the same with committees.

And, lastly, the Governor has veto power if it does pass both chambers. By design, it is hard to pass bills in Texas, so constant engagement and committee meetings are a must for any meaningful legislation to pass. During session the RLCTX board and our Legislative Directors are in constant contact with Representatives and Committee Members to push our bills and priorities.